Home Environment 15 Most Polluted Rivers in the World

When we think of rivers, we think of these majestic, fast-flowing waters that gush from the mountains. But today, how often do we come across rivers with clean water? The quality of river water is not the same as it used to be.  It’s incredibly sad to say that that rapid industrialization and improper waste management has led to this list even existing.

It is said that up to 90% of the plastic in our oceans comes from the 15  most polluted rivers in the world. Another disheartening research reports that our oceans, by weight, might have more plastic than fish by the year 2050.

So, which are the major rivers contributing to this pollution? Where are these rivers located, and what exactly are the leading pollutants?

Let’s find out together. 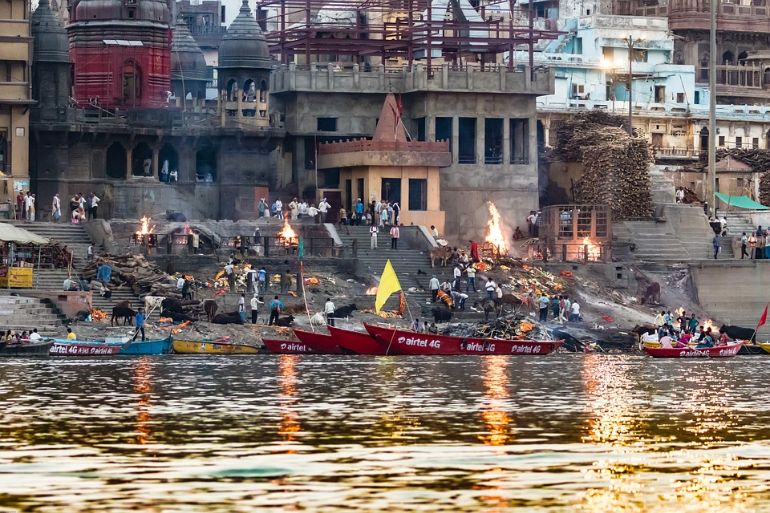 The Ganges is considered to be the most sacred river in India. It is believed that a dip in this river can cleanse off your sins. The irony is that it is also one of the most polluted rivers in the world.

This river stretches 1,569 miles long, and the pollution consists of mostly untreated sewage. India has a large population of nearly two billion people that depends on this water. Not only this, but the Ganges is also the third-largest river in the world.

The pollution is not limited to sewage but also contains quite a lot of visible garbage. This garbage includes anything from industrial and chemical wastes and even dead bodies! Nearly 1.2 billion pounds of plastic waste is dumped into this river every single year.

This high degree of pollution can pose a health risk to the population directly or indirectly. According to the Indian Council of Medical Research (ICMR), the people that reside on the banks of this river are at a higher risk of cancer than anywhere else in the country. 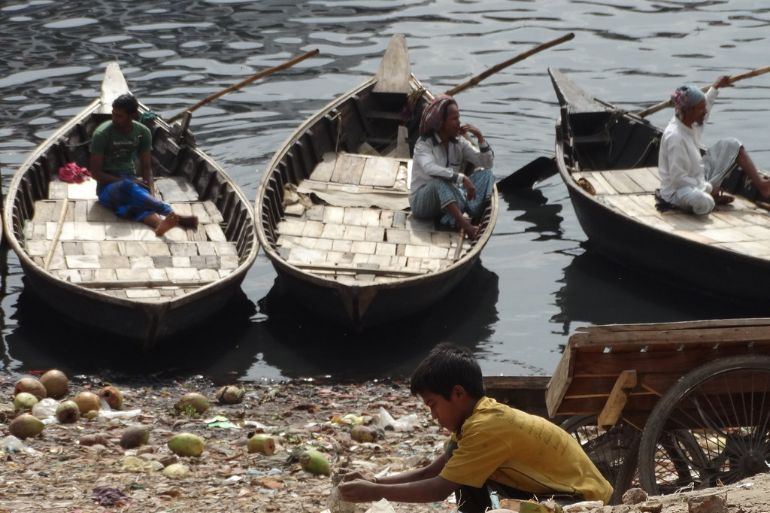 Buriganga is the largest river in Bangladesh. It is thus vital to the daily economy of the country. The most significant contributors to this pollution are the tanneries located near the river. These tanneries dump unused skins and hides of animals into this river.

Furthermore, this river is primarily contaminated with human wastes, plastics, and dead animals. It is estimated that nearly 4500 tons of solid waste are dumped into this river every day. About 80% of the sewage that goes into this river is completely untreated.

The contamination is such that the water has turned black, and there is no aquatic life possible. Flowing through a city of 10 million people, this river has a foul smell and acts as an eyesore to the otherwise beautiful city. 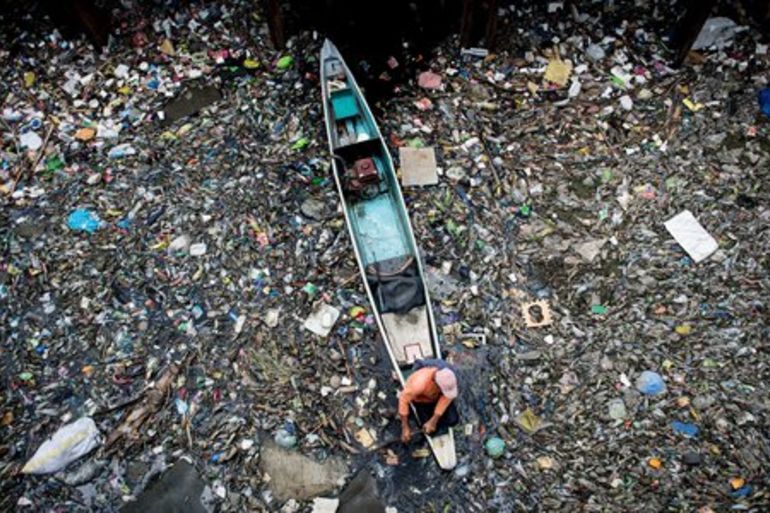 Marilao River is located in the Philippines. The water from this river is used by many residents for drinking and for agricultural processes. The majority of this pollution comes from nearby tanneries and gold refineries. Non-recyclable wastes such as plastic bottles are also a dominant pollutant.

The most dangerous thing is that this river is prone to flooding. If proper precautions are not taken, then this contaminated water could have a much broader reach. Similarly, this high level of pollution is extremely harmful to any aquatic life. The river is full of toxic wastes, which leads to a depletion of aquaculture. 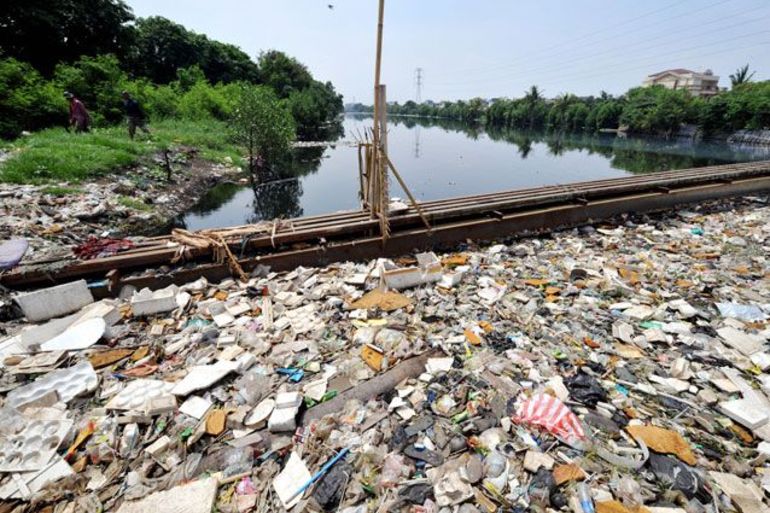 Citarum River is located in Indonesia.  Indonesia has a population of over 200 million either directly or indirectly affected by this water pollution. Adding to this, the river flows through densely populated areas.

The main contribution to this pollution comes from industrial wastes. These wastes increase the mercury levels of this water. This river is polluted not just at its outlets but also at the source itself. Despite having to use this water, Citarum is continuously used as a dumping ground.

Yangtze River is located in China. Due to the increasing industrialization, there has been substantial addition of nitrogen wastes into this river. This nitrogen then aids in the growth of algae on the river surface. This process is known as eutrophication.

You can notice these algae on lakes and ponds as they cover the surface with a green texture. The aquatic lifeforms felt the negative consequence of this. The lack of oxygen in the water can lead to the elimination of any marine life within the river. This can further cause a disbalance in the river’s ecosystem. 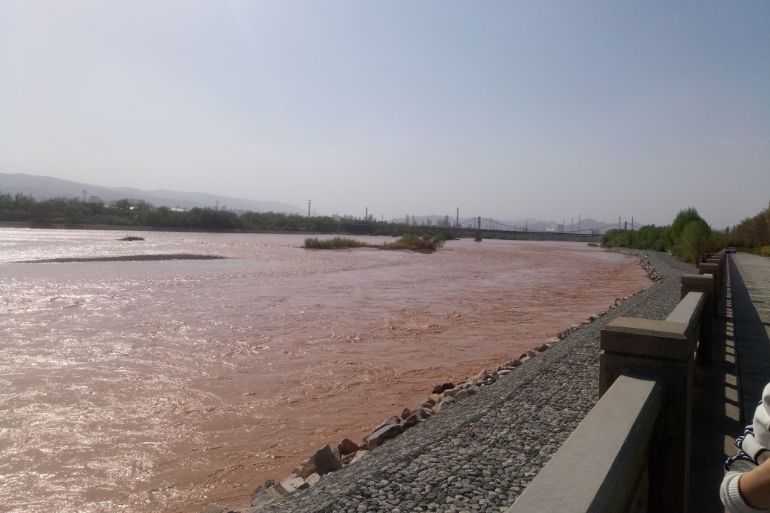 The Yellow River is the largest river in China. It gets its name due to the presence of yellow sediment known as ‘loess.’ This sediment gives the river its yellow color. The primary contaminant in this river is industrial waste.

China is leading the global economy with its fast-growing economy. However, as the development is rapid, so is the pollution. The Yellow River is so full of pollution that it has been deemed too toxic to be even used for agriculture. This water is said to have killed 30% of the fishes in this river. The coal mining industry is considered to be mainly at fault for dumping water without any processing.

Despite being high in toxic, this water is still being used as a source of drinking water. This usage has been mostly responsible for a significant rise in waterborne diseases, cancer, and even some birth defects. Recently, there have been efforts to stop the usage of this water as it is unfit for human or animal consumption.

The Sarno River is high on the leaderboard as the most polluted river in the European continent. It is located in Italy and is so toxic it has affected all the lives around it. The main culprit here is the mismanaged dumping by industries and agricultural practices.

Another culprit is the poor waste treatment control in Italy. This river is also prone to flooding. In case of a flood, this contaminated water can reach other places and cause a wide-spread of diseases. This river is already responsible for a sharp increase in liver cancer cases among people living around the area. 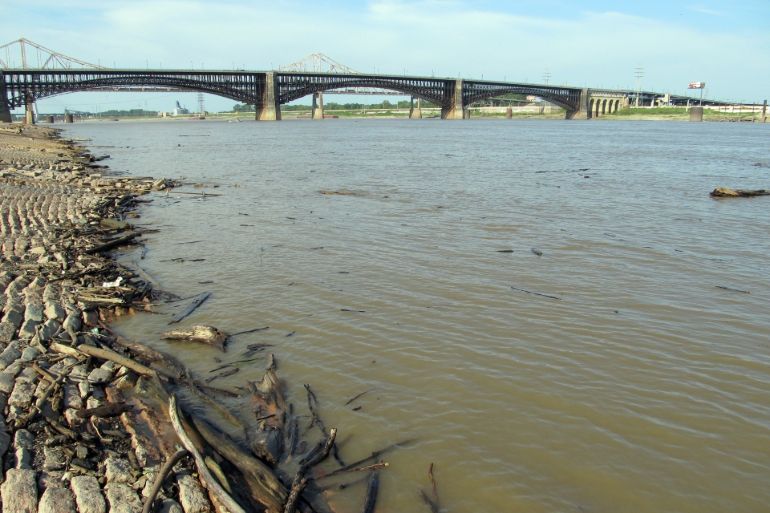 The Mississippi River, located in the United States, is one of the longest rivers in the world. The constant disposal of wastes and improper management has resulted in the river sporting a brown color. This river has also faced a lot of oil spillage. Benzene, arsenic, and mercury are some of the common pollutants in this river.

The main contributors to this pollution are industries and agricultural run-off. The harmful pesticides and herbicides are released untreated into this river. These fertilizers are usually nitrogen-based, which reacts with the oxygen in the water and reduces it. This reaction results in a significant loss of aquatic life. 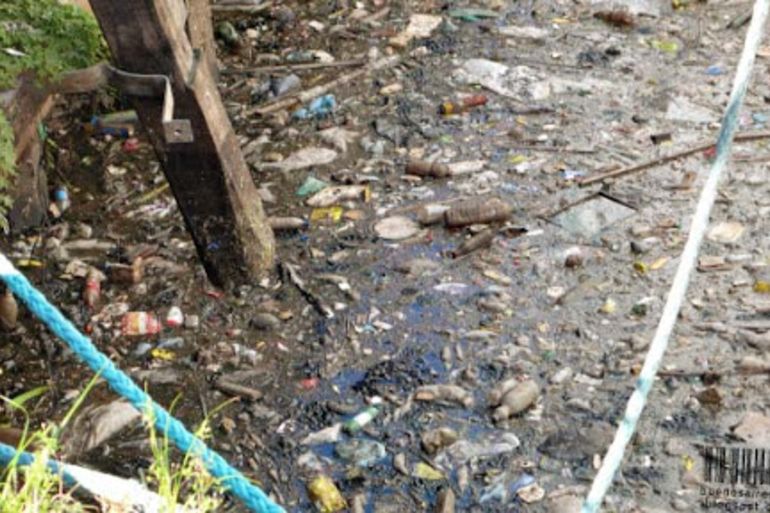 The Matanza Riachuelo river is located in Argentina. This river is a top contender for being one of the most polluted rivers in South Argentina. It even goes by the name Slaughterhouse River. It gets this name due to the dumping of wastes from slaughterhouses and tanneries surrounding it.

The primary source of pollution for this river is industrial sewage. The water in this river has been found to carry heavy metals, such as mercury and lead. Consumption of this water can lead to many health complications and result in rising cases of cancer. 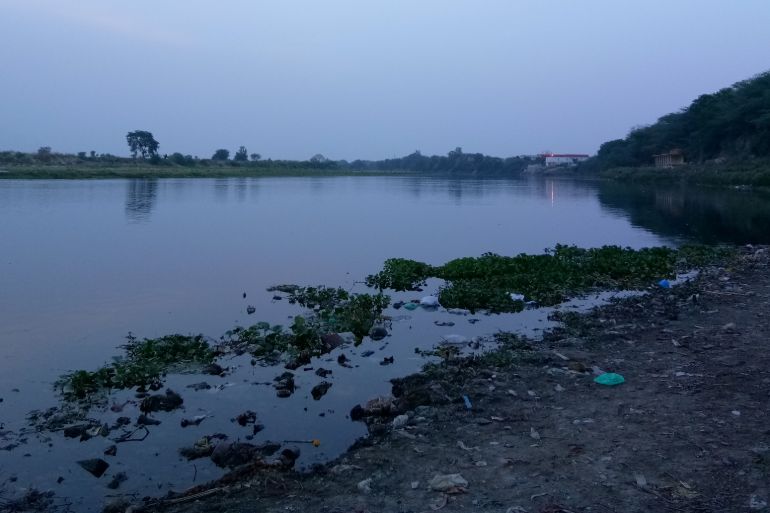 The Yamuna follows the Ganges closely in terms of pollution. Due to poor waste management of raw sewage, this river has become extremely polluted. The other contributors to this pollution are agricultural and industrial wastes.

The level of contamination in this river is thought to be so high that the toxicity would remain the same even if we added any water treatment now. The water has become totally hazardous with a pH value of 11, where the pH of normal water is usually 7.

The river Jordan is considered to be the third most holy site in the Holy Land. It flows through countries like Syria, Israel, and Jordan.  This river then flows through the Sea of Galilee into the Dead Sea. The water from this river is used for industrial, agricultural, and municipal purposes.

The main contributor to this pollution is the improper disposal of sewage and agricultural run-off. Similarly, there is also a significant amount of brackish water due to the inflow of seawater. The bottom 100 miles of this water are primarily affected by this, which unfortunately is where this river water is used the most.

Another concern is that this water is disappearing year by year. Since this is the only source to the Dead sea, both these water sources are at risk for drying out entirely. This river acts as an essential Christian site and is even used as a drinking water source by the West Bank residents. However, this river has been polluted dangerously and is not at all safe for consumption. 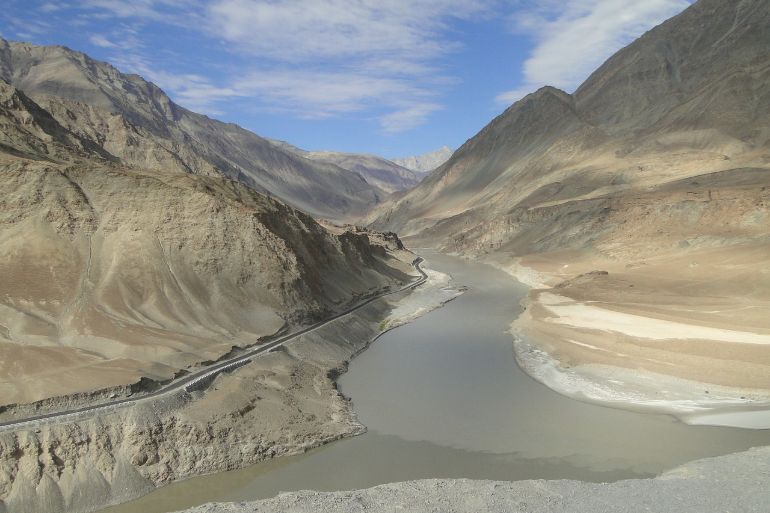 The Indus River is the longest river in Pakistan. Millions of people use the water from this river for bathing, trading, fishing, and for religious ceremonies. Household sewage, agricultural, and industrial wastes make up for the majority of the pollution. There is also a staggering amount of plastic waste in this river.

The fish species are on a constant decline due to the high level of pollution in this river. The Indus River Dolphin has already fallen victim to extinction due to high levels of pollution. Consuming this river is a severe health hazard.

It is not just dangerous to the residents around the river but also to all the people who might use it as it flows through India and into the Arabian Sea.

Doce River stretches a total of 530 miles, flowing through southeast Brazil. This river used to supply fresh water to some of the largest steel industries in Latin America. However, in 2015, the Mariana dam disaster caused two dams to rupture. This rupture released over 60 million cubic meters of contained sludge into the river.

This toxic sludge caused devastating impacts on the aquatic life that depended on this water source. It may take decades for this river to get rid of this high toxicity. It has impacted thousands of lives that used this water as a drinking source or a source of economy. This spill is known as one of the worst ecological catastrophes in the history of the world.

The Neva River is located in Russia. It is only 46 miles in length but is polluted enough to compete with the rest of the rivers on this list. The main contributor to this pollution is the unchecked industrial dumping. An estimated 80,000 tons of raw sewage and industrial wastes are dumped into this river every year. Oil spilling is another contributor to this river.

The Neva River has been deemed entirely unfit for swimming. Toxicity levels are so high that the river often changes colors. There have been some cleanup efforts, but still, it remains highly polluted and unsafe for consumption.

The Cuyahoga River runs through Cleveland and flows into Lake Erie. As it runs through the city, it collects quite a lot of waste materials. More specifically, it gathers a lot of industrial waste. This waste collection has even caused the river to catch on fire numerous times.

There have been many efforts to clean up this river, which has improved the water quality. The improvement is evident in the variety of fish species it can now brag of. However, it still falls under a river of concern in terms of pollution.

These rivers are not just for aesthetic purposes but also as a source of livelihood and drinking water for millions of people. Many of these polluted rivers are located in Asia, but cleaning them is a global responsibility. These rivers will run into our river carrying all the toxicity and destroy our marine life as well. The Earth has a minimal supply of fresh water, and we should do everything in our power to make sure our supply can remain intact.