How Much Energy Does a Wind Turbine Produce?

Wind energy is a viable source of alternative energy that uses wind to generate electricity. It is also a form of solar energy. Many parts of the world have strong wind speeds where they can easily produce electricity, but some of the best locations for generating wind energy are mostly in remote areas. Moreover, offshore wind power has tremendous potential to produce electricity.

All over the world, wind power is considered eco-friendly, cost-saving, and energy-efficient energy. The concept of wind turbines originated more than a century ago. Later, in 1887 and 1888, wind energy generation took place in the United States and the United Kingdom. But, the new wind power was developed in 1891 in Denmark, where horizontal-axis wind turbines were built.

The amount of energy one can generate from wind depends on the wind speed, size of the turbine, and the length of the turbine blade. 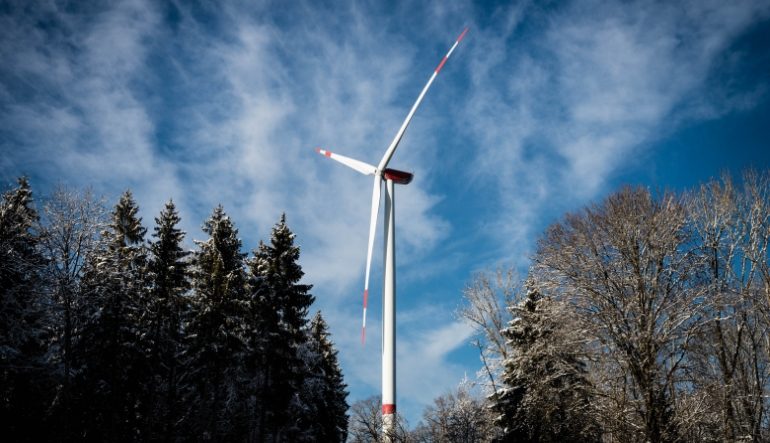 According to experts, it is estimated that a 10kW wind turbine has the potential to generate up to 10,000 kWh worth of energy per year. However, this evaluation relies on a turbine that may produce energy if it ran all the time, which won’t always be possible.

The fact is that there will be days, weeks, and even months where there isn’t enough wind for the turbine to produce the targeted amount of energy. It will only be able to provide a small fraction of its expected energy output. A soft and gentle breeze is not enough to power a wind turbine. Moreover, the extreme heat will render it practically useless.

The perfect way to calculate how much electricity a wind turbine produces is to multiply the air density with the mechanical efficiency of the turbine.

Here are some of the significant factors that determine how much power a wind turbine produces:

Wind speed fluctuates, which has a direct impact on generating electricity and operating characteristics. There is no doubt that wind speed is one of the significant factors that determine how much power a wind turbine can produce. However, many areas don’t experience the needed amount of wind to power a turbine consistently.

The US and most European countries have already begun the use of wind turbines in industrial sectors, residential areas, and for other purposes. It doesn’t matter which brand or manufacturer you buy; if the weather conditions aren’t favorable, then it won’t generate much power.

Although, if the average wind speed increases marginally to 12 mph, then you can expect a remarkable boost in the amount of energy that’s produced by the wind turbine.

Altitude is another major factor that contributes to the amount of power a wind turbine generates. The higher you place the turbine, the more power it will generate.

For example, a wind turbine placed on a 100-foot tower will produce about 30% more energy than a wind turbine on a 60-foot tower. The numbers will automatically increase if there are no obstructions around or near the turbine, such as structures or tress.

The size of the wind turbine will determine how much electricity it can produce. Wind turbines with large rotor blades tend to generate more energy than turbines with smaller ones. While it may not seem like much of a difference, a 10-foot rotor blade can produce 58% more power than an 8-foot blade.

But, make sure to look for suitable and quality components for the wind turbine. Avoid manufacturers and brands that boast about power production while providing little to no information about the parts they use.

Efficiency plays a vital role when assessing a wind turbine. The modern, technologically advanced wind turbines use a variety of designs intended to help them capture wind more efficiently.

It is not feasible for a turbine to convert 100 percent of wind passing through the blades into power. Due to its friction, these machines only have efficiency ratings of between 30 percent and 50 percent of rated power output.

Advantage and Disadvantage of Wind Energy

There is no doubt that wind power is one of the technological breakthroughs that might lead to more efficient energy production. While the future of wind energy seems promising, some demerits are noticeable.

Global installed wind-generation capacity offshore, and onshore has increased by the aspect of almost 75 in the past two decades. The wind power capacity has risen from 7.5 gigawatts (GW) in 1997 to some 564 GW in 2018, according to IRENA’s latest data.

Wind-turbine capacity has also increased over time. In 1985, typical turbines produced a capacity of 0.05 megawatts (MW), whereas, with the advancement of technology, today’s new wind power projects have increased the capabilities of about 3–5 MW offshore and 2 MW onshore. Therefore, the average capacity of wind turbines increased from 1.6 MW in 2009 to 2 MW in 2014.

According to the International Renewable Energy Agency (IRENA), the production of wind electricity in 2016 was accounted for about 16% of the electricity generated by renewables.

Many factors determine how much power a wind turbine can produce, and among all those wind speeds, efficiency, and turbine size play a significant role. Moreover, the capacity of wind turbines varies from one model or design to another. The implementation of wind energy is continuously growing, and today, about 79 countries have wind energy already in practice. Out of the 79 countries, 24 are producing more than 1,000 megawatts. This incredible renewable energy provides almost 3% of global electricity consumption.

How long does a Wind Turbine last?