If you look into the energy revolution, solar energy is turning into an important part of the energy mix all around the globe. It is not going anywhere anytime soon so many countries have adapted to this viable source of electricity. This switch not only cuts down carbon pollution, but it also contributes to the overall economy of a country.

So, where is solar energy used the most? Here, we have a list of countries that have taken the lead in making the most out of the sun’s energy. So, let’s get right into it.

Where is Solar Energy Used the Most?

The concept of solar power generation is expanding worldwide. According to IRENA’s 2018 Country Rankings dashboard, China is at the top with a commitment to generate more eco-friendly energy.

China is the nation highly committed to renewable energy at a gargantuan 130 gigawatts. Along with the largest population and carbon footprint, China is also the largest producer and buyer of solar panels. Giant solar farms are installing the majority of photovoltaic products in remote areas that sell the energy to utilities.

Due to the nation’s severe air pollution crisis and the need for electricity, China has increased solar power stems drastically. In 2018, it held a record for the largest operational solar project for the 1,547 MW project at Tengger.

Japan is another one of the most densely populated nations in the world. It lacks abundant open space and cannot cover huge swathes of land with solar panels. However, it has still managed to be a leader in terms of solar energy production.

After the Fukushima nuclear plant disaster, Japan was determined to switch to solar energy as a plan to double its renewable energy by 2030. The nation gained popularity of golf around the 1980s, which led to abandoned golf courses as of 2015. Many of these courses are now covered in photovoltaic products. They have found creative ways to install solar panels, successfully creating floating “solar islands”

The United States is home to some of the largest solar power plants. It is the third-largest growth market for renewables. In the coming years, renewable projects in the US may benefit from multi-year federal tax incentives as well as the state-level policies for distributed solar panels.

The fastest-growing market segment is the residential sector. The U.S. has expanded its output with the help of substantial government incentives given to this sector. With the rise in the cost-competition of solar power and other resources, U.S. output is expected to get considerably high.

Germany is considered as a key leader in the production of PV power and achieving the highest-ranking country for solar PV per capita. Moreover, Germany has met almost 50% of the nation’s daily energy needs from solar power.

India has one of the fastest-growing solar industries. In March 2019, its solar installed capacity reached around 28.18 GW and it became the lowest-cost producer of solar power in the world.

The government of India had a target of 20 GW capacity for the year 2022, which was achieved way ahead of schedule in the year 2018.

Although this country does not produce as much solar power in comparison with other leading nations. In 2014, Italy created an 18.5 GW that represented almost 10% of the country’s total energy needs, more than even the leading countries.

However, tax breaks provided to solar farms have now expired. They have been foreclosed upon or sold. As a result, the overall output of Italy is expected to decline.

Even with very little year-round sun, the UK has managed to decrease the cost of PV technology. The government has taken initiatives of introducing solar panels to schools, businesses, and homes.

In the year 2017, solar energy accounted for almost 3.4% of Britain’s total electricity generation. By 2020, the government will create 4 million solar-powered homes.

In 2018, solar PV accounted for 5.2% of Australia’s total electrical energy production. In March 2019, the country had more than 12,035 MW of installed PV solar power.

Although, it has PV projects that are due to start construction, under construction or constructed. Australia is producing relatively little with all the resources, infrastructure, and solar power it gets.

In the first 6 months of 2018, the French solar market grew 59% with large-scale solar installations. The nation’s cumulative installed PV power was above 8.5 GW, and the newly installed PV capacity reached up to 479 MW.

France is steadily growing as a generator of renewable energy. The developed energy industry, political spirit, and thriving economy help it to switch to environment-friendly energy.

By 2030, South Korea aims to add 30 GW of PV. It will improve the nation’s poor renewable energy performance. About 9% of that capacity is to be commenced in Saemangeum and 14GW of solar energy is to be installed before 2020. 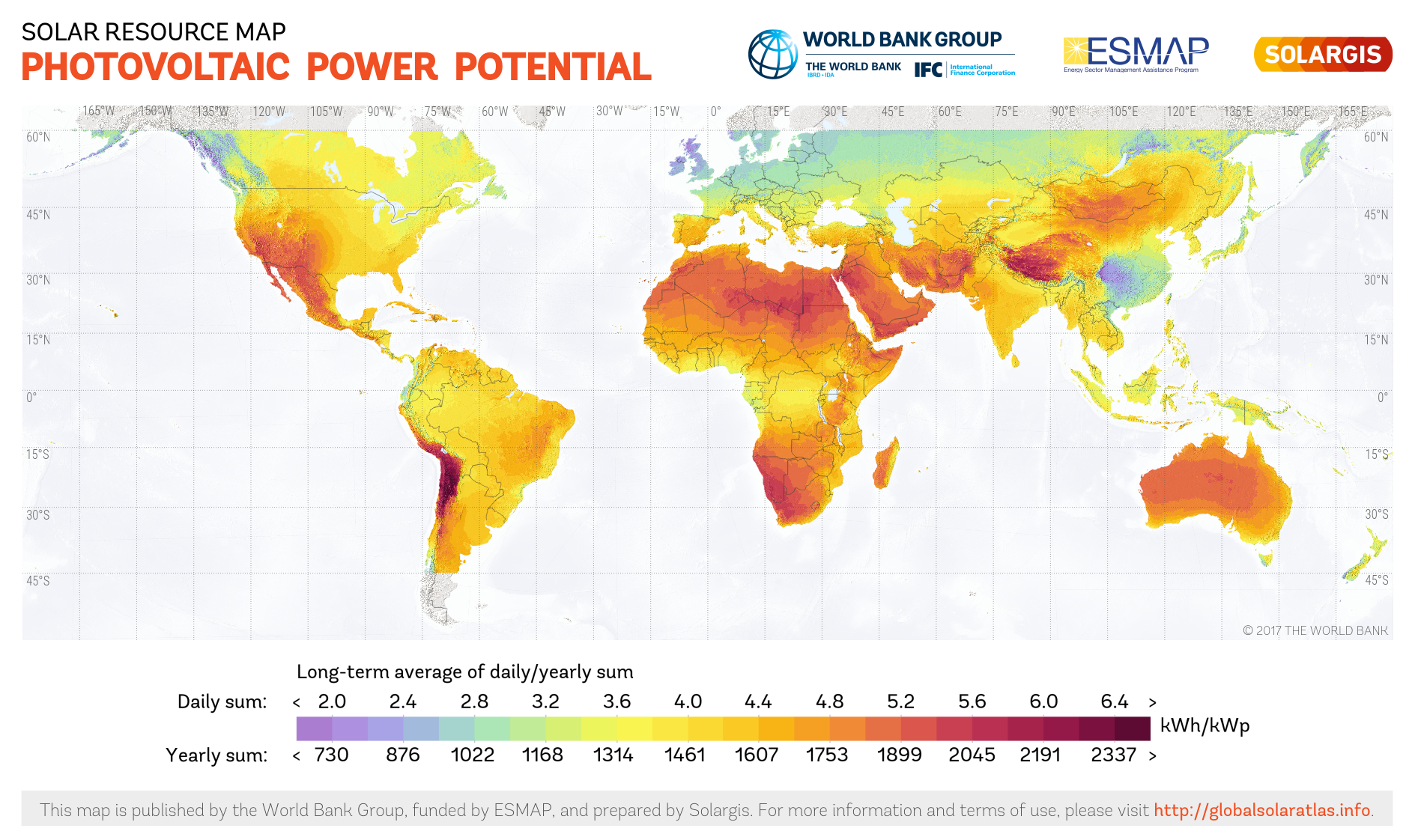 The areas that fall near the equator have higher PV potential because it gets a higher amount of sunlight throughout the year. Another main reason is, these areas lack snow and ice which reflects solar radiation back to space. There are many factors that play a role in the PV potential of any geographic area such as day length, sunlight angle, and surface reflection.

How is Solar Energy Used?

There are many gadgets and technologies that have adapted to solar power. Here are a few examples of how and where solar energy is used.

The solar energy is measured with photovoltaic energy that is responsible for the production of electricity and the thermal energy used for heating water. You will never run out of this natural source of energy.