Home Types of Renewable Energy Sources and Consumption Statistics What is Solar Energy and How Do Solar Panels Work? Types of Solar Power Plants and Their Technology

A solar power plant provides the facility that converts sunlight either directly, like photovoltaics, or indirectly, like solar thermal plants, into electricity. It comes in a variety of designs, with each using discretely different techniques to harness the power of the sun.

In the following article, we have mentioned different types of solar power plants, which harness the sun’s life-giving sunlight to produce electricity. 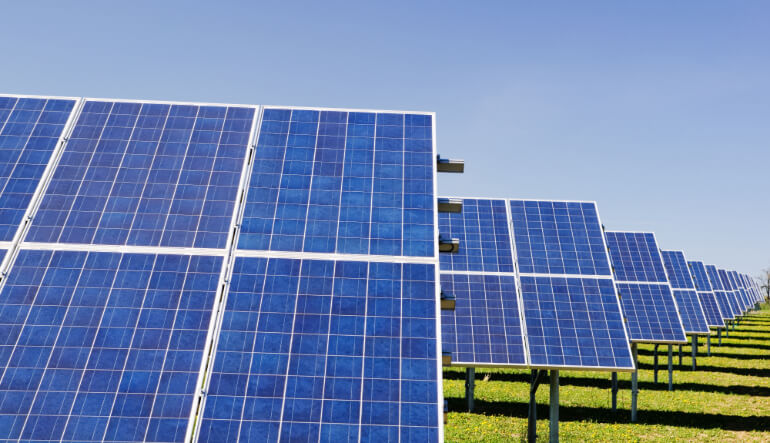 A solar power plant is in proper use when the energy from the sun is converted directly into a useable form. The solar energy can be used daily for powering all kinds of appliances that are present in the house. Eco-friendly and energy-saving use of solar energy takes place when homes and buildings get maximum exposure to the rays of the sun and work appropriately.

There are many different types of solar power plants constructed in most parts of the world. It includes the photovoltaic solar energy plant, solar thermal energy plant, and concentrating power plant.

The photovoltaic solar plant effect is also known as the photoelectric effect, which converts light into electricity. It was discovered by French physicist Edmond Becquerel in 1839 and first used on industrial applications in 1954.

The photovoltaic solar plant is the appropriate substitute for everyday electrical energy, which we use in houses for powering electrical appliances. Photovoltaic cells will capture the energy from the sun and convert it into electricity. The process of energy conversion is clean and straightforward, and it does not involve injecting any smoke or harmful chemicals into the atmosphere.

Many companies have decided to have grids containing photovoltaic cells installed on their premises so that they can draw the maximum amount of energy from them and also reduce their dependence on the traditional forms of electrical power. 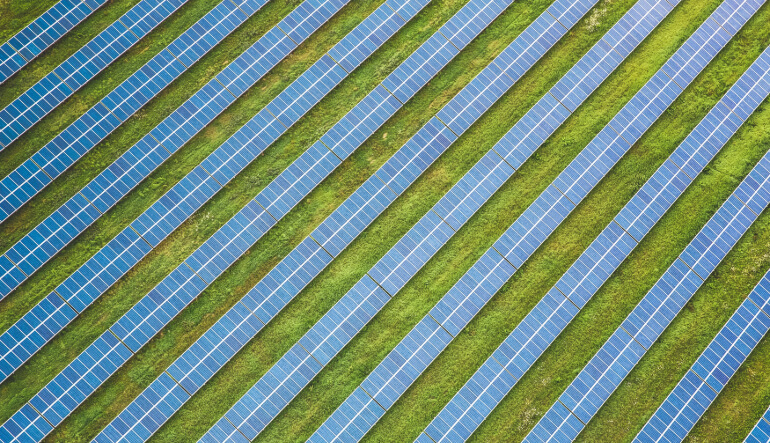 Solar thermal power plants absorb the heat directly from sunlight and generate steam to feed a turbine and produce electricity.

A solar thermal power plant is used for creating solar-generated heaters, which can also be used for heating water and as an indoor heating system. Thermal cells capture the sun’s energy and convert it into heat energy. Besides, you can apply solar energy for cooking purposes and even for drying clothes.

Low temperatures are ideal for heating water and swimming pools as well. Whereas, medium heat is perfect for heating the inside of homes as well as office buildings. High temperatures will help in generating electricity, which requires everyday uses in homes and offices.

Flat-plate collectors are widespread and designed for a dark surface area that absorbs sunlight. A layer of thermal cells is insulation topped with a sheet of glass and produces a greenhouse effect. 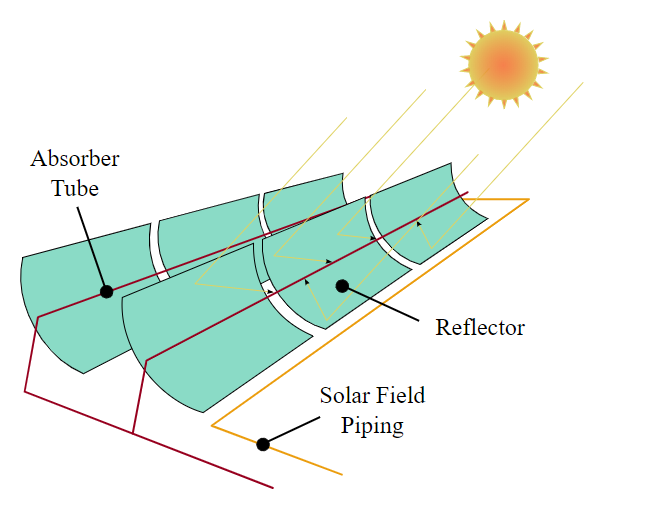 Parabolic troughs use parabola-shaped reflectors that can focus between 30 and 100 times normal sunlight levels on to the collector. The method is used to heat a particular type of fluid, which is collected at a central location to generate high-pressure. 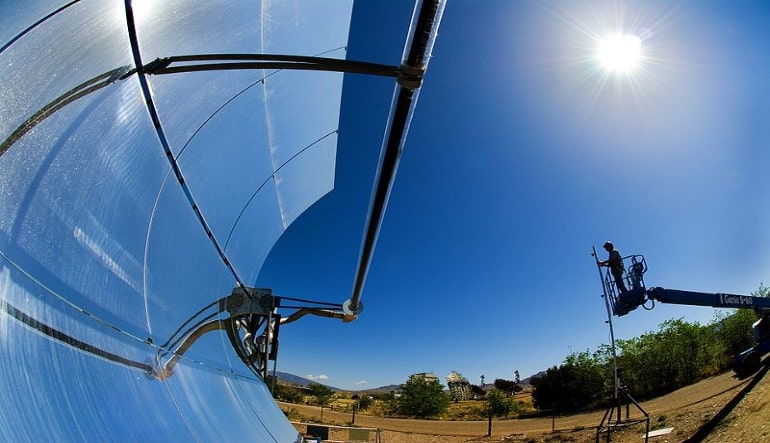 Linear concentrating systems, also known as Fresnel reflectors, which consist of a large area of sun-tracking mirrors tend to be arranged in a south-north orientation to maximize sunlight absorption. This setup will allow the banks of mirrors to absorb the sunlight from every side throughout the day. 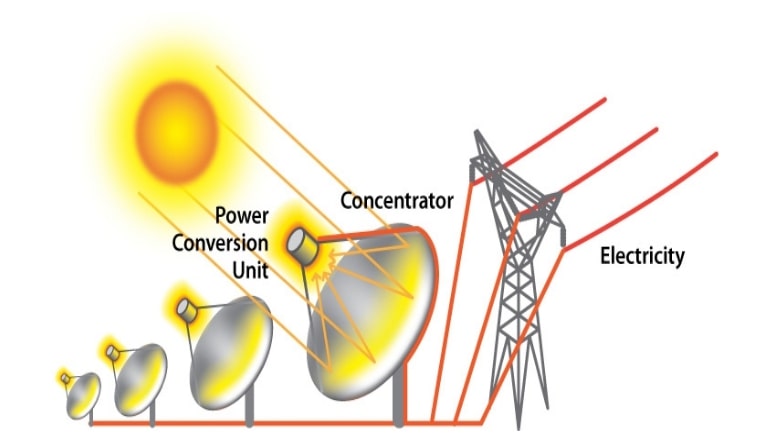 Solar dishes also use mirrors to focus the energy of the sun onto a collector. Moreover, it consists of oversized satellite dishes clad in a mosaic of small mirrors that concentrate solar energy onto a receiver at the focal point. 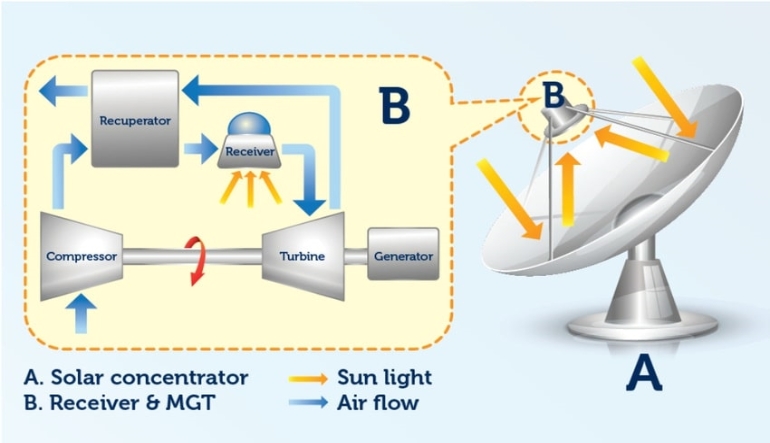 This type of thermal solar power technology concentrates the warmth of the sun’s rays using collectors to heat transfer fluid at a high temperature. The fluid heats a network of water and eventually produces steam that drives a turbine and therefore generates electricity.

The method with which a thermal solar power plant functions is quite similar to that of the photovoltaic solar energy plants. The extra addition in these concentrating power plants is that they make use of mirrors and lenses to capture energy from the rays of the sun. The light from the sun will be collected in the photovoltaic cells and converted into heat energy.

The heat from the sunlight is collected in large power plants where flat or curved mirrors are installed over vast fields. This technology is ideally suited to those countries where the sunlight is intense, for example, in desert regions.

Usually, big companies make use of these concentrating power plants for utilizing solar energy. The presence of solar power plants in many parts of the world has made the correct use of the heat from the sun possible. They help in reducing the consumption of electricity to a large extent.

Solar energy is renewable, readily available, eco-friendly, and clean. It can provide enough electricity to meet the world’s annual consumption needs in every 50 minutes. It is one of the most attractive alternative energy due to its flexibility. It has the capacity to power homes, cities, and industries using large solar plants, and it can offer the power to the rural regions as well.